Seacoast had another excellent weekend for our fencers.  Our Rochester club hosted a D tournament this Saturday with 67 competitors, which included the largest women’s foil event that our division has had in over a year.  We drew fencers from as far away as New Jersey, Connecticut, and Rhode Island, as well as the neighboring states of Vermont, Massachusetts, and Maine.  Seventeen Seacoast fencers competed, and three of our junior’s went home with medals.

Our best result was a silver medal by Hannah McPherson in the Women’s Foil D.  She fought a hard battle in the final, scoring three touches in a row to tie the bout at 14-14.  Unfortunately, her run ended, and she finished in second place.

In the Mixed Epee D, our fencers tied for third.  Brian Austin and Solomon Bixby fenced well, but ultimately lost in the semi-finals.  However, Brian earned his first rating with this finish, and is now an E-17, while Solomon re-earned his rating.  Congratulations to these three, and to all the Seacoast members who entered, and through competition, became better fencers. 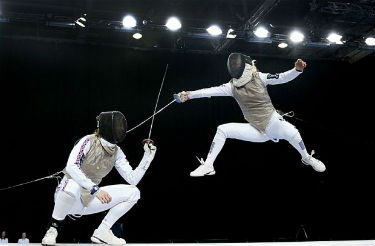